We hold ten regular meetings per year on the 2nd Thursday of each month at 7:30p.m. We meet at the Grace United Methodist Church located at 4905 East Yale Avenue, Denver, Colorado (just west of I-25 and Yale). Additional parking is available in the church parking lot on the north side of the building. 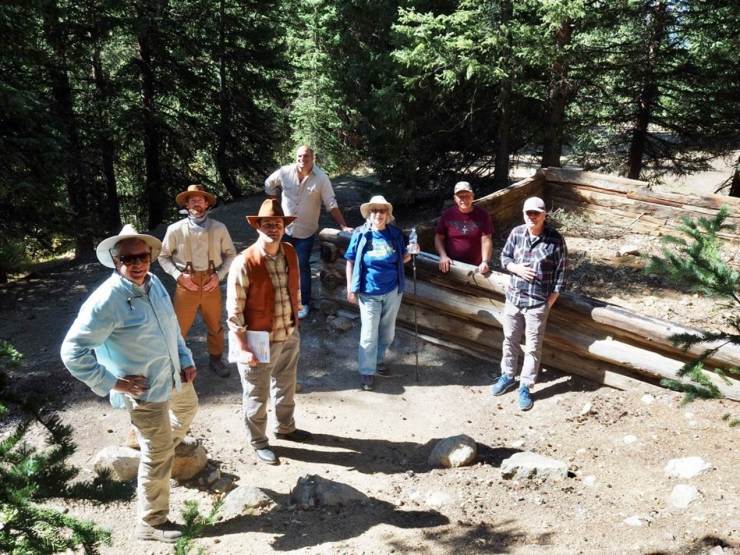 On September 25th The Ghost Town Club of Colorado enjoyed a trip led by Josh Robinson up Peru Creek with a second half of day featuring a stop in St’s John. We met in the parking lot at the Snake River Saloon and began with the morning report which included a share of information and photographs along with a tantalizing hook about a Mystery Guest who would be joining us during our second half of day adventures. The group was ready, rearing and excited! Gary Wallden shared a great map that served as our large-scale visual for the day, Jason Messing debuted his full-on 19th century gear and we had one guest in attendance.

We loaded up drove up to Peru Creek. From there we arranged 4×4 rides and began our gradual climb back the valley. Our first stop was at the ruined site of Chihuahua. This was anticipated to be one of the highlights of the trip, but turned out not as planned. As of last season 2020, the site still had a beautiful single-story house, with roof. Much to our dismay, the last standing house had been destroyed. The building appeared to have been dismantled down to about 4 logs high and the remaining walls carted off. The other scattered ruins of the site had also been disturbed and dismantled. A sad ending to the last remnants of the formerly important town site. The group mourned.

From there, we moved to the ghost of Argentine/Decatur/ Rathbone…take your pick of names. We explored the ruined primary street and the few sunken log buildings scattered at its Western edge. Roger Callender identified one as a ruined livery stable and the group discussed his findings including a feed trough still along one wall. At the primary street we utilized 19th century photographs to make out what buildings had been there, putting life to the neat row of ruined cellars and foundations. Jason sent the drone up and captured images of our group from above as we explored the Mill.

We then moved down the road to the great ruin of the Pennsylvania Mill. The group rested here for lunch and explored the building afterwards at great length. The Mill was massive with much of its equipment buried under great mounds of timber. One end of the building is still precariously upright at 3 levels high. Jason then sent the drone up and captured images of our group from above as we explored the Mill. The group then loaded up and began the steep 4×4 road to the upper tram building of the Pennsylvania mine. The views were spectacular, and the surface buildings were too. Several folks explored the upper tram building climbing into its depths exploring complete equipment hanging on the edge of the mountain. Others spotted mines high on the opposing ridge and mountain face, Jason flew the drone over for a closer look. From there we began our journey back down the way we came up. Along the way Dennis Kristensen’s keen eyes located the Chihuahua Cemetery as we passed by. This was previously unlocated by Josh or anyone else on the trip.

Down again at pavement, we began our second half of the day’s adventure starting in Montezuma. We loaded up the vehicles again and started the steep climb up the shelf road to Sts. John. Arriving on the Main Street and exploring the many ruins along it, including the Boarding house and Hotel, the Assay office and the still standing Mine Superintendent’s home. The group had been anxious to meet the Mystery guest all day and knew the time was now! Finally, we would meet the mysterious man who would share his breadth of knowledge about the site. All day Josh had been dropping clues about the Mystery Guest’s identity, and still no one knew for sure who it was …the anticipation was great! We looked and looked for him, and it turns out….he was looking for us! While the group was on one side of the townsite-our Mystery guest was on the other!! The guest was there, and we were there, but it just wasn’t meant to be. The Mystery guest was our very own Ron Ruhoff who had also led this very same itinerary in 1960. Lucky for the group, we ran into a friend of Ron’s there, and he assumed the role of the Mystery guest and shared with us his cabin, some stories and photographs Ron had given him of the site. So, we ended up with two Mystery Guests, one we missed, and one we didn’t know we had!

Overall, it was a fantastic day, and we covered a lot of ground; from the recently destroyed Chihuahua site, to the unassuming Argentine, the Giant Pennsylvania Mill and its tram building, to the near miss Mystery Guest at Sts. John. We had a Blast. After the trip was over several of us returned to where we began at the Snake River Saloon. Here we relaxed and took in a hearty meal, enjoying good company, good food and reflecting on the day’s adventure.

Do you enjoy our field trips? Have you ever thought about leading one?

It’s easy! Find a friend, team up, and plan a trip for the club. Field trips can be for a few hours, a morning or afternoon, a full day, a weekend, or a week long excursion.

Want more information? Check out our printed guide on planning field trips for a step-by-step how to guide. Remember it’s always easier and more fun to work together. Some of our greatest field trips were been led by people who had never planned a trip before. Let’s go exploring together!